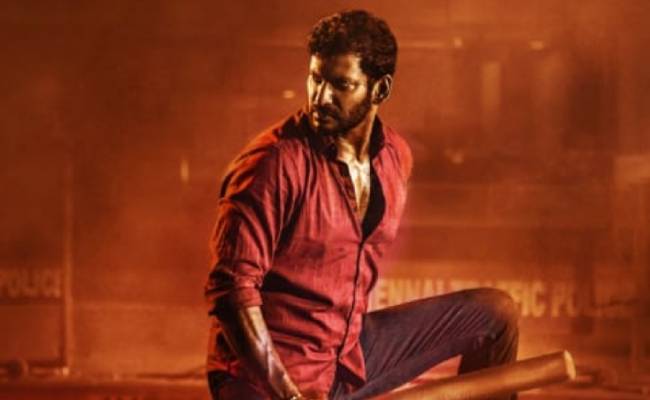 On the event of Vishal is celebrating his 44th birthday, August 29, Vishal moved on social media to reveal his upcoming movie Veeramae Vaagai Soodum.  It is a Tamil action movie, directed by Thu pa Saravanan. Kavin Raj is the cinematographer for this film. Yuvan Shankar Raja composed the music for the movie which was to be produced by Vishal. Yogi Babu is also playing a key role. Vishal and Dimple Hayati are the main roles. The film celebrities Marimuthu, Yogi Babu, Tulsi, Kavita Bharathi, RNR. Manohar, Mariam George, and Maha Gandhi played helping roles

The film is about a common man from a middle-class family asking the leaders for using their powers. Vishal treated his fans with an attractive first look at his movie, titled Veerame Vagai Soodum, which seems in the poster as Vishal Mass Avatar. He can look like posing in the center of the street after hitting several gangsters.

The Veerame Vagai Soodum teaser has released on Jan19. The action-packed teaser tells that Vishal’s role is a common man who has to battle for the rights of ordinary people. Many war scenes live and a glimpse of the romance between the characters. They are executed by Vishal and Dimple in the movie again given to the observers. The nearly 90-second teaser gives a glimpse into all the activity the audience hopes for from the movie. The teaser received 2.1 million views on YouTube.The movie shooting has almost stood finished.

Lately, the Veeramae Vaagai Soodum movie group reveals the movie has prepared to hit theatres on January 26th, through the occasion of Republic Day. But it has postponed to February 4 2022 due to some reasons.