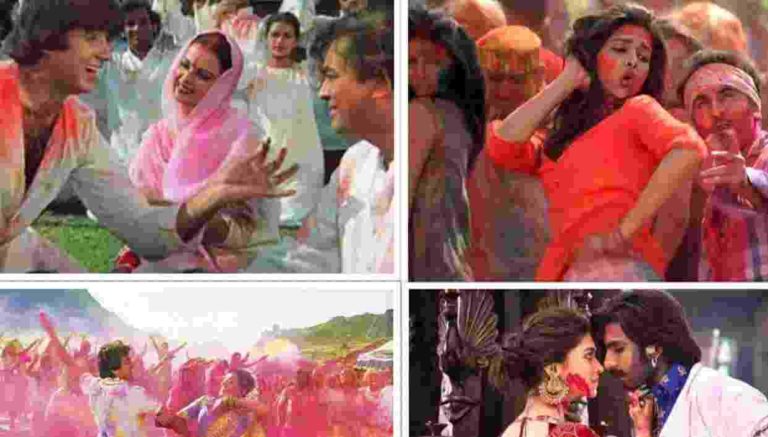 Holi is an ancient Hindu Festival which has now spread across Asia. In fact, Holi festival and Bollywood movies have an old connection. There are a lot of Bollywood movies that are inspired by Holi Theme from 70’s till today. Here we will see the list of Holi Hindi movie and songs.

Rang Barse is like a Holi Festival Anthem from the movie Silsila and also is the most played songs in Holi. Silsila is another cult classic movie showcasing a love tragedy between featuring Sahi Kapoor as Shekar and Amitabh Bachchan as Amit. Also, this movie highlights the Society demands from back in the year 1981.

Sholay is a cult classic Bollywood movie released in the year 1957. This movie is directed by Ramesh Sippy, starring Amitabh Bachchan and Dharmendra in the lead role. Holi ke din is another song on everyone’s Holi playlist. This song is a perfect celebratory song for your Holi dance.. On the other hand, Sholay is one of the most searched and watched movies. Sholay is no doubt a worth watched a movie.

Directed by Subhash Kapoor, Jolly LLB 2 starring Akshay Kumar and Huma Qureshi released in 2017. The film had a Holi number titled Go Pagal which had Akshay Kumar shaking a leg to this song sung by Raftaar and Nindy Kaur. This is the perfect Holi song for you and your friends to go crazy on.

Yeh Jawaani Hai Deewani is not typically a Holi theme movie, but the song “Balam Pichkari” represents Holi. Also, this song is heard in every corner during Holi. On the other hand, the movie showcases a different color in life similar to Holi. Whereas, the movie is Directed by Ayan Mukerji starring Ranbir Kapoor and Deepika Padukone in the lead role.

One of the latest entries in the list of evergreen Holi songs, Balam Pichkari works because of its awesome rhythm and fun beats. It makes your feet tap and you automatically join in on the dance floor.

Gali Gali is a fun, high-energy song from the Vishal Bhardwaj directed film Pataakha that you can dance to at a Holi celebration. This song will definitely make you groove.

Soni Soni celebrates the budding love between the 3 lead couples of the super hit movie Mohabbatein. Shahrukh Khan in this song provides the energy and the Holi spirit along with Anupam Kher, Archana Puran Singh, and Aishwarya Rai.

Lyricist Sameer brought out his best lyrics for this rustic Holi song. Apart from celebrating Holi, this song brings in the missing rural touch in the words, which elevates the song to a whole new level.

Goliopn Ki Raasleela – Raam Leela is one of the best movies of the year 2013 directed by Sanjay Leela Bhansali. This movie also stars Ranveer Singh and Deepika Padukone in the lead role. Raam Leela highlights the story about Ram and Leela falls in love even after being an enemy. Also, Lahu Munh Lag Gaya is one of the most heard songs every Holi festival from 2013. The lyrics are strong enough to make you feel sexy and confident. It is a must play song with all the color and water around you.

This fast-paced song portrays the fun side of celebrating Holi. A playful Akshay Kumar sharing the screen with Priyanka Chopra in a traditional avatar makes this song more watchable. The desi and western fusion here have added to the peppy music by Anu Malik.

The latest entry to the list, Badri Ki Dulhaniya is as danceable as it is hummable. It has a cool and young vibe which is apt for a party. You can learn the dance routine of the song and impress everyone as soon as you hit the dance floor.